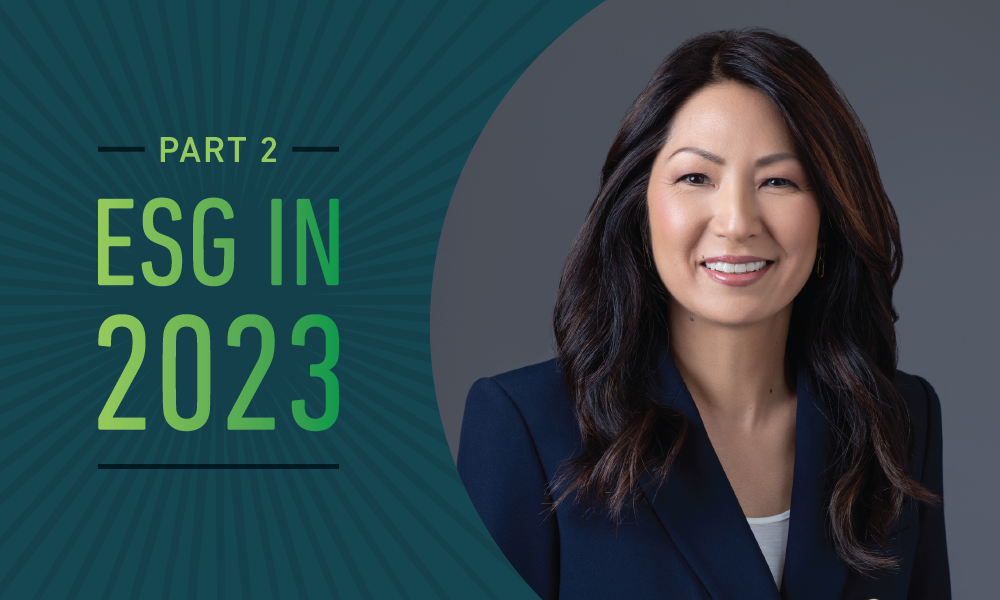 This is the second of three posts intended to provide an overview to help leaders make ESG decisions in this new year. The last post reviewed 2022’s extreme weather events exacerbated by global warming. This one will review measures elected officials, business leaders and government officials took last year to try to prevent catastrophic climate change. The third blog will offer a framework to help leaders determine how aggressively their organizations should pursue an ESG agenda.

The Inflation Reduction Act provides nearly $370 billion in funding and tax credits for climate and clean energy provisions. Characterized as the largest-ever federal investment in combatting the climate crisis, the bill is expected to cut U.S. greenhouse gas emissions by about 40% by 2030.

In addition to implementation of the act, the federal government will soon require companies with which it does business to disclose their greenhouse gas emissions and commit to a science-based climate target. Also, the US Securities Exchange Commission (SEC) will soon publish rules to require publicly traded companies to disclose their carbon emissions rates.

On the world stage, passage of the bill did much to restore America’s leadership position in the fight against climate change. Doubt arose about the U.S.’s commitment to sustainability when the Trump administration withdrew from the Paris (COP) Agreement in 2017. Despite President Biden rejoining the agreement on his inauguration day in 2021, skepticism remained because U.S. emissions continued to grow.

Because The Inflation Reduction Act is certain to decrease emissions, leaders of other nations now have stronger defenses of their own environmental agendas and incentive to press forward aggressively, if only to capitalize on the new technologies and industries that will emerge as American investment fuels business transformation in many sectors.

Given its purported critical role in the effort to prevent environmental catastrophe, the climate summit in Sharm el-Sheik, Egypt, was ultimately unimpressive and uninspiring. It fueled the growing perception that COP is mostly a meeting of bureaucrats who reach agreement on programs with limited follow-through.

After agreeing in Glasgow (COP 26) to cut emissions and to provide massive funding to help poor countries deal with climate change, most of the developed nations took little action. Promised funding of $100 billion per year is barely trickling in.

To underscore the growing disillusionment with the COP meetings, famed environmental activist Greta Thunberg did not bother to travel to Egypt, saying, “The COPs are mainly used as an opportunity for leaders and people in power to get attention, using many different kinds of greenwashing.”

The COP conference earned some credibility by a last-minute agreement on “Loss and Damage,” a long-sought priority for developing nations, which contribute the least to climate change but suffer the most from its impact. The United States and other major industrialized nations have for years resisted a loss and damage mechanism because they wanted to avoid financial promises that the domestic political climate precludes delivering.

The details to the Loss and Damage agreement are minimal, as there is disagreement about which nations will contribute to the fund, which will receive funding, how funds can and cannot be applied, and much more. Given how slowly signatories to other COP agreements have acted, skepticism about the timing and eventual impact of this new mechanism is understandable.

“The COPs are mainly used as an opportunity for leaders and people in power to get attention, using many different kinds of greenwashing.”

The War in Ukraine Creates Challenges for Pro-Climate Energy Policies

Russia’s invasion of Ukraine led to a collapse of its energy relationship with Western Europe, upset the world energy market and prompted changes in U.S. policy. Most notably, the Biden administration had to reverse its anti-Big Oil position to encourage increased domestic production and allow oil production agreements with Ecuador. It also was compelled sell 180 million barrels of oil from its Strategic Petroleum Reserve to increase gas availability in the U.S.

This White House emphasis on increasing oil availability was characterized by critics as proof that the attacks on fossil fuel associated with ESG are flawed and that green energy is not adequate to meet today’s fuel needs. This apparent rebuttal to ESG thinking emboldened attacks primarily from conservatives in the United States and other countries against progressives who are strongly associated with ESG.

A Sharp Escalation in the Politicization of ESG

The energy policy contradictions created by the war in Ukraine provided a foundation for conservative media and political attacks on ESG as election fervor (and spending) rose over the months leading to America’s November elections.

Corporations that have been trying to adopt ESG programs, in part to appease their growing numbers of activist employees articulating ESG concerns, are becoming popular targets for conservative critics who claim corporate leaders are straying from their core business responsibility by catering to the demands of “woke” progressives.

Some “red” states are beginning to take their state pension funds out of financial firms whose ESG stances are being characterized as anti-fossil fuel. In August 19 state attorney generals wrote a letter to BlackRock – the asset management firm renowned for its pro-ESG advocacy – accusing the company of violating its fiduciary responsibility by using ESG as one of its investment criteria, which “force the phase-out of fossil fuels, increase energy prices, drive inflation and weaken the national security of the United States.”

BlackRock replied with a letter stoutly refuting the accusations.

Conservatives were targeting ESG’s social component more than its environmental component. At the local, state and federal level, conservative candidates railed against the teaching of critical race theory, trans student education policies, pro-LGBT policies, racial consideration in admissions, and other “hot-button” issues regarding the way marginalized people are treated.

Perhaps the dispute which most alarmed business leaders was Disney’s dogfight with Florida Governor Ron DeSantis. After Florida passed its “Don’t Say Gay” legislation that prohibits elementary school discussion about sexual orientation and gender identity, Disney was prodded by its employees to speak out in opposition. In apparent retaliation, Florida lawmakers passed a law eliminating Disney’s special tax and self-ruling status.

As intended, this immediate and substantive political retaliation drew the attention of many CEOs, causing some to consider reducing the visibility of their embrace of ESG. With Republicans now in control of the House of Representatives and with President Biden up for reelection, they must consider that ESG will become weaponized to even greater threat levels.

In his post-election victory speech in November, Governor DeSantis declared “Florida is where woke goes to die,” perhaps positioning himself for a rumored presidential run for office in 2024. This is precisely the type of polarized sentiment that will continue to define the current ESG landscape that organizations must navigate.

In case you missed it, read part one of our three-part ESG in 2023 series.