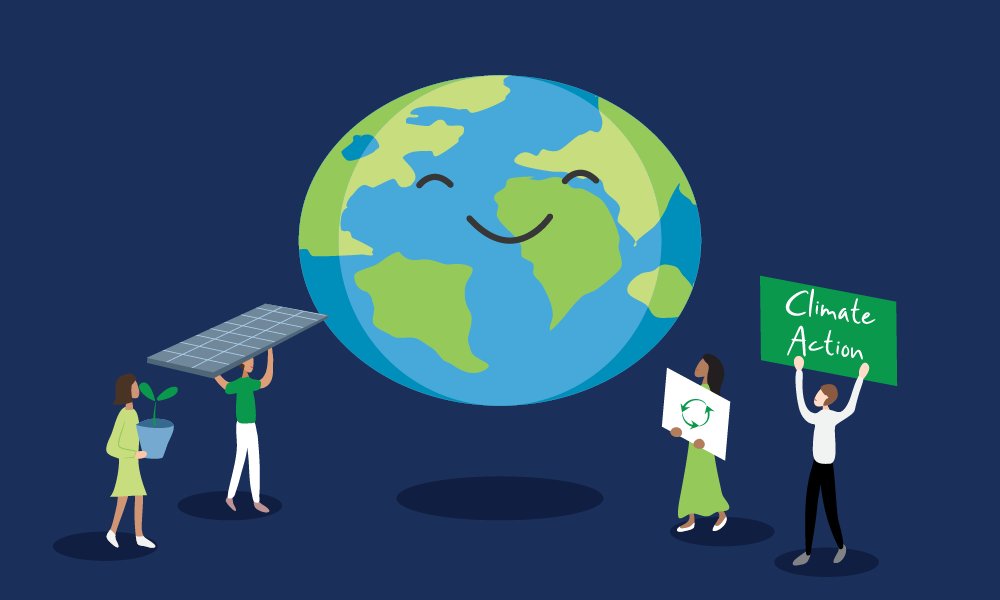 When I was a little kid, my babysitter, Nancy Anderson, placed a green pin on my T-shirt. I made no effort to conceal my deep infatuation with Nancy Anderson, and I listened with rapt attention as she explained to me the vital importance of something called “ecology.”

This week – a half-century later – the Intergovernmental Panel on Climate Change, a UN-backed organization made up of 195 member countries, released its latest report on our ability to adapt to the effects of climate change. The outlook is grim. And for those of us in the field of business communication, there’s nowhere to hide.

The climate crisis is affecting every living thing on Earth. So at the Techonomy Climate conference in California last week, climate scientist Katherine Hayhoe opened by posing the question, “Why don’t people care?” Maybe it was my imagination, but I swear she was looking at us – the communicators in the (virtual) room. That’s because of the question behind Dr. Hayhoe’s question: How can we get people to care?

One of the conference themes was that whatever we’re doing about climate change, we need to do more – and we need to do it personally. Already driving an EV? Good for you: Now switch to public transportation. Got solar panels on your roof? That’s a start, now how about convincing your neighbors to do the same?

Even for those who “get it,” it can be hard to relate to discussions about a 1.5 degree rise in temperature or a 3-inch rise in sea level. That’s where we come in. As communicators, we’re in the business of getting people to care enough about a thing to take some action. That action might be to open an email, or it might be to purchase a pair of Balenciaga crocs. It might be to sign up for mandatory cybersecurity training, or it might be to buy, hold or sell shares of stock.

As communicators, we’re in the business of getting people to care enough about a thing to take some action.

So why not apply our know-how in service to climate action as we go about our work? Scott Corwin, the US Leader for Sustainability & Climate Change at Deloitte, made the point that climate change means business change: “Every organization of any consequence is wrestling with this topic. They’re concerned about how Wall Street is going to value them if they’re a public company, about their cost of capital, about attracting employees, and about the SEC climate disclosure rule.”

As business communicators, we’re employed by organizations of consequence. No matter what industry we’re in, doing our jobs today means getting people to care enough to take action on climate. Just as organizations are increasingly expected to report on their climate impact alongside traditional measures of financial performance, we, as individuals, can keep a personal tally of our efforts to bring about climate action alongside the traditional measures of our job performance. In addition to moving more products, did that social media campaign get people to think differently about their carbon footprint? Besides strengthening shareholder confidence, did that earnings call script underscore the importance of investing in climate risk mitigation? Beyond informing employees about open enrollment deadlines, did that intranet post encourage them to reevaluate their way of commuting to work?

I don’t know where Nancy Anderson is today, but I like to think that she’s wearing a green ecology pin as she convinces the people right around her to care about what’s increasingly recognized to be the greatest challenge of our lifetimes.