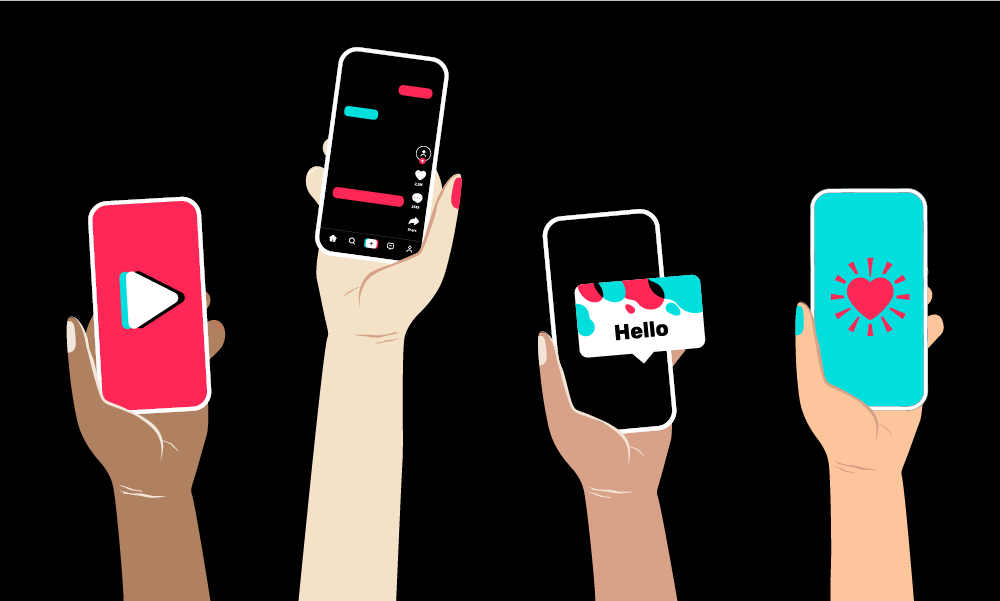 TikTok has arrived. What started out as a platform on the fringes of social media, adopted primarily by a younger demographic, has exploded in popularity with more than 2 billion downloads as of April 2020, double from 15 months ago. With a former Disney executive taking the reigns as CEO, the addicting app has become even more mainstream and relevant to new audiences.

Companies are already leveraging the popularity of TikTok to promote their brand or product. But is it right for your brand? Read on to learn about how TikTok works, how brands are using it, and if you should add it to your social media marketing mix.

Similar to the now-defunct Vine, TikTok is a platform for short-form videos. It originally started out as a lip-syncing platform called Musical.ly, but evolved to be an all-encompassing showcase for creative content. Users shoot and edit videos up to 15 seconds long in the app, adding music, lenses, filters, stickers, and text. Short videos can be strung together to create a recording up to 60 seconds long.

TikTok creators tend to reinterpret jokes, dances or audio dialogue, often adding a new or creative twist. Each TikTok has an audio button that allows users to easily grab the audio in the video they are watching to use in their own video. This remixing often results in meme-like trends or challenges.

Content can be discovered through hashtags or on the “For You” page, an algorithmic homepage that is personalized to each user based on the content they view or the creators they follow.

TikTok users are even using their follower base to advocate for change. A number of creators that have built a following with their lip-synching and dance videos are using TikTok to spread messages calling for racial justice in the wake of police brutality and anti-racism protests.

How are brands using TikTok?

Tiktok by nature is designed to delight and entertain, and creators only have a split second to make an impression. The videos that tend to go viral quickly catch viewers’ attention and are usually comedic, creative, informative, emotional or mesmerizing.

The Washington Post was one of the first traditional newspapers to embrace the platform and has since garnered a half million followers with more than 22 million likes across its videos. The channel consists of behind-the-scenes footage of the newsroom or events, short features with presidential candidates, and funny educational clips that help to raise brand awareness, like its “how to read a newspaper” comedy sketch.

Just like Instagram, TikTok has given rise to influencers who have millions of followers. Companies like Sephora, T-Mobile and Netflix are partnering with these creators to showcase their products and engage new audiences.

Since posting its first TikTok in February of this year, Nike has amassed 1.1 million followers and 4 million likes across its videos. The brand partnered with athletes for a series that shows off their shoes and unique athletic moves with the hashtag #magicboots.

In addition to forming partnerships with popular creators, brands can also utilize TikTok’s paid advertising formats. Brands can create ads that resemble native TikTok content to appear in users’ in-feed video. These ads have the potential to get likes, comments, and most importantly, clicks to their website.

Similar to SnapChat, businesses can promote their brand by releasing branded lenses, stickers and other fun augmented reality elements that creators can use in their videos.

Should you use TikTok to promote your brand?

Like any social media network, TikTok has had issues with safety and security. Concerns aside, with its skyrocketing audience and cultural influence, TikTok is a force to be reckoned with, or at least considered.

The key to success on TikTok is knowing your audience and being able to serve content that seamlessly integrates into the platform. Luckily, dipping a toe into the TikTok world does not require a large investment. No costly video equipment or editing software is needed. All brands need to start is a bit of authenticity and creativity.